PRINT 18, held September 30 through October 1, at Chicago’s McCormick Place seemed to be suffering from the same malaise as other once-large, all-encompassing industry trade shows. One way you can judge the traffic at these events is to use what I call a “bump meter.” That is, if you bump into a lot of people in crowded aisles, it’s a well-attended show. At PRINT 18, I bumped into a few people, but not as many as might be expected.

I thought one of the highlights at PRINT 18 was that a section of the floor had been put together like a software village with various developers demonstrating their newer types of applications. The fact that they were all in one area generated a positive synergy that was good to see. However, noticeably missing were several legacy firms that historically exhibited at the event, which is a sign of the times and a troubling trend in the trade show business.

Another noticeable missing element of the show was that so few vendors exhibited hardware. The days of moving in six-color presses or 12-foot alignments of interconnected digital production lines seems to be gone. One reason may be that the larger vendors—both digital and offset—now have Customer Centers at their headquarters that showcase the equipment. It’s easier and less expensive to invite potential buyers there, where they also have the advantage of fewer competing distractions.

A reason for reduced foot traffic at PRINT 18 may be that there are several industry events you can attend that offer a narrower focus, each centered on an industry segment or a specific type of print application, which seem to draw attention from the big shows. Additionally, everyone has better access now to a plethora of information gained through online searches and through the greater willingness to share opinions with peer groups about equipment, experience with installation, implementation, maintenance and so forth. Vendors, too, are more willing to help in the decision-making process.

Finally, what’s new always drew attendees to the shows. Previously, printers would travel to see the new print and prepress technologies in operation, or to witness firsthand what kind of color quality you could get from digital presses. Of course, vendors are still developing upgrades, adding more bells and whistles that can improve productivity and profitability, but the revolution has settled into a less spectacular evolution. The trade shows are certainly worth attending if you know what you’re looking for, but less like magic than they once were—and there is some nostalgia attached to that. 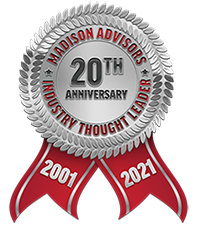 Happy Holidays from all of us at Madison Advisors!